Xiomara was the fifth in the 100 yard backstroke. She finished at 1:00.04. With this result she broke the record of her school. The record was since 1998 from Tadla. 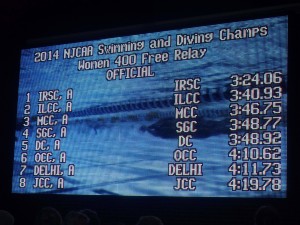 The Surinamese Sport website SME Sport also reported about the performance of Xiomara and Tariq getrouw at the meet in February 2014. Another article about this meet was posted on the website of the Suriname Herald.